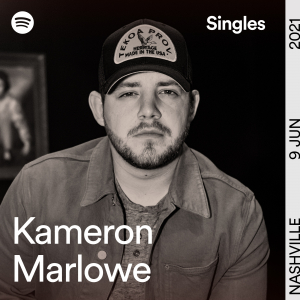 Side B is Kameron’s take on the Johnny Cash classic “Folsom Prison Blues.”

Talking about the recording, Kameron says, “I chose to cover ‘Folsom Prison Blues’ because Johnny Cash is one of my all-time heroes. To me, he is the Godfather of country music, and I have always had nothing but respect for how his sound and songwriting have influenced so many artists, myself included,” said Marlowe. “

As far as the new take on his own song, Kameron added, “I decided to re-work ‘Giving You Up’ because I wanted to try something new. That song will always hold a special place in my heart, and it’s fun for me to try different styles every once in a while.”