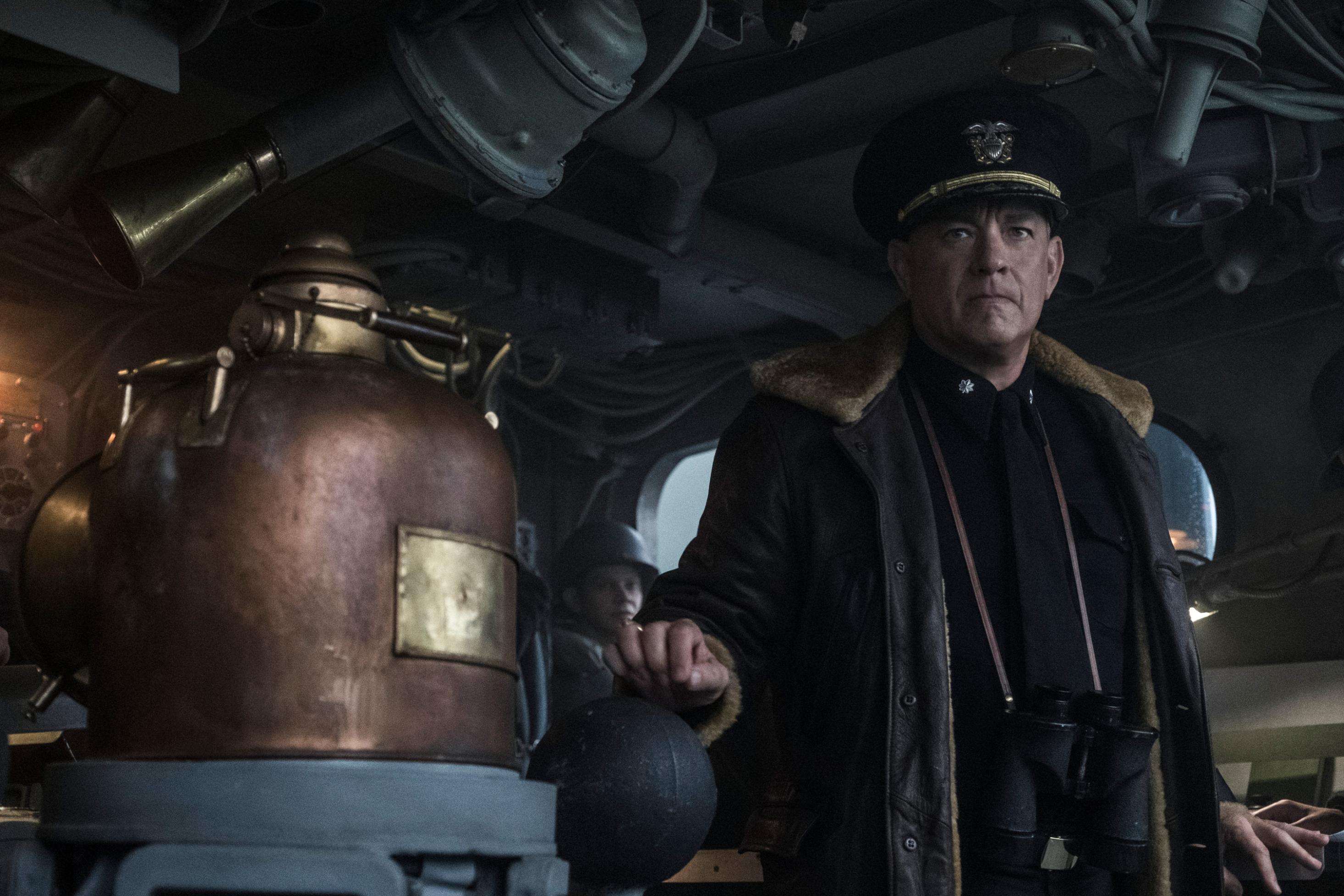 “Greyhound” is kind of an odd duck — another World War II tale courtesy of Tom Hanks, who wrote and produced the film through his company in addition to starring in it. Old-fashioned and relatively small in scale, it’s a sturdy if unspectacular depiction of the Battle of the Atlantic, streaming ashore via Apple TV+ instead of a planned theatrical release.

Adapted from the 1955 novel “The Good Shepherd,” the film is loosely inspired by actual events, but has a throwback feel that smacks of old Hollywood. Hanks plays Ernest Krause, a first-time captain leading a naval convoy of 37 ships ferrying soldiers and supplies to England in 1942.

After a perfunctory introduction (there’s little time to waste at 90 minutes), Krause heads into what’s known as the “Black Pit,” a five-day stretch during which no air cover is available to help ships under his protection ward off marauding German U-boats, which taunt the Americans in thickly accented transmissions.

The most salient wrinkle of the movie — directed by Aaron Schneider — is that essentially all the action takes place within the claustrophobic confines of the main escort ship, with only voices heard from the nearby vessels as the captain plays cat and mouse with the pack of submarines.

In that respect, the best cinematic point of reference might be the 1981 German film “Das Boot,” representing a sort-of complement to “Greyhound,” focusing as it did on a U-boat crew. The main difference is that this film has been stripped of almost all personality. Viewers barely get to know anybody other than the captain, and even him not that well, with Hanks’ personal charisma doing most of heavy lifting as a devout man who wants to marry his gal back home (Elisabeth Shue, briefly), if only he can get there.

Stephen Graham (“Boardwalk Empire”) plays Krause’s executive officer and Rob Morgan his loyal steward, but beyond that, the pickings are slim for the rest of those on board, limited to terse military dialogue and tense expressions as they wait to see if their commander has the right stuff.

On the plus side, the action unfolds at a brisk pace, conveying the unrelenting peril these ships faced practically from the moment they set sail.

Hanks, of course, has a rich history of World War II projects — not just Steven Spielberg’s “Saving Private Ryan,” but also producing the epic HBO miniseries “Band of Brothers” and “The Pacific.” He’s a draw, although like most movies redirected to streaming or on demand since the coronavirus outbreak (which Hanks experienced firsthand), one suspects the studio didn’t sacrifice much of a box-office bounty in bypassing that step — considered surprising at the time — from its distribution.

Compared to Hanks’ other war-themed efforts, “Greyhound” is a conspicuously modest affair — nicely shot, featuring a stirring musical score (by Blake Neely) and telling its story with spartan efficiency. In that sense, the movie has a fair amount in common with its protagonist: unassuming and low-key, but competent enough in carrying out its mission.